I am an editor, writer, and author.

Words: My Sword. Switch the letter “S” in Words from last to first and you create Sword. The power of the word is mightier than the sword.

One of my first published works was a poem entitled Space. It was printed on page 207 of The World’s Great Contemporary Poems in 1981. 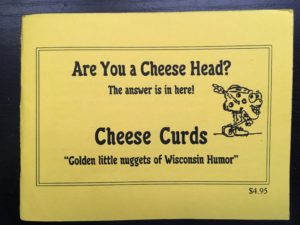 Are You a Cheese Head?

In 1996, one of the first books I self-published was a compilation of answers to the question: Are you a Cheese Head?…and it was called Cheese Curds: Golden Little Nuggets of Wisconsin Humor. Here’s an excerpt: You might be a Cheese Head if…Your local game warden automatically drops road kill off at your place.

It was inspired by light-hearted fans of Wisconsin’s professional football team. Unfortunately, today police and game wardens are instructed to leave road kill on the side of the highway.

As an author, I contributed a story about my mother that was published in Threshing Rings and Chalkboard Lessons. Sub-headings included “A Living History of Central Wisconsin” and “Tales from the Good Old Days in Central Wisconsin” which is where I grew up. My article was titled: The Teacher’s Son–The Son of a Saint and appeared on page 259. Unbeknownst to either of us, my cousin Michael Peace also had an article published in the book, issued in 2015. His piece was about my mother’s sister, Aunt Theresa, Mike’s mother.

In 2004, while I served as a director for the networking organization in northeast Wisconsin, I was fortunate to contribute an article to Dr. Ivan Misner’s collection of motivational stories about successful business people called Masters of Success. Dr. Misner founded Business Network International (BNI) and is known as the father of networking. I resigned my position with BNI in 2010 after launching 17 chapters, including four gold star groups.

I have published more than 100  blog posts, including ones about upcoming books. I’ve written numerous articles for business magazines on marketing and business planning techniques, and my novel Shevivor is now available. Pick up a copy today.